Opening Frontiers of the Art Spirit

Schilling was an Artist-in-Resident at Isle Royale National Park in 1996 and his painting of the Edisen Fishery was named one of the Top One-Hundred paintings by the National Academy of the Arts for the Parks for their national traveling exhibition in 1997-1998. In 2004, his painting, The Amazing Silversword, was accepted into the prestigous Top One-Hundred by the Academy. He has been chosen Artist-in-Residence at Mesa Verde National Park for 2006.  Schilling worked ten years as a part time, dental officer on Holland America Cruise ships. He also serves as a short-term dental volunteer in developing countries.

Richard's recent exhibition for "Out of This World" was featured at the Rez Art Exhibit. The exhibitions featured paintings inspired by imagery from the Hubble Space Telescope.

Richard Schilling has written best-selling and award winning books that will enrich any reader’s experience. Each book is filled with watercolor sketches and interesting stories. Your book will be autographed and if desired, include your special inscription. 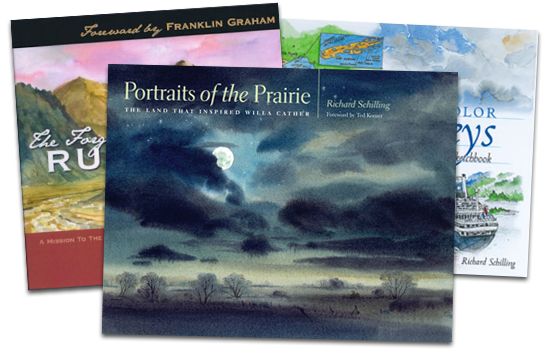 Scratchings from the SketchPad of the World Wide Watercolorist

WHERE IS RICHARD NOW?
THE NEXT EVENT

You are welcome to visit the gift shop to view artistic products created by Richard. Please contact us if you would like more information regarding original paintings.

One of Richard’s passions is to inspire and help others expand their horizons through his inspirational watercolor books and captivating paintings.